The most common degrees that make a billionaire

We once dreamed of being millionaires, but these days that seems like pocket change to the richest people in the world, with over 2,000 people holding the title of billionaire. 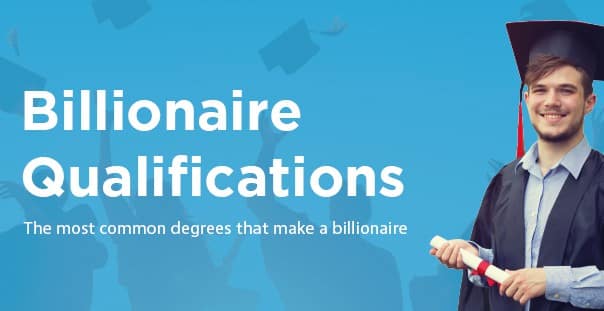 Learn what it takes to become a billionaire through higher education data.

But what is it that makes these people so successful and what commonalities do the members of this elite club share? We took a look at the education of the wealthiest individuals in the world to see if there are certain subjects that billionaires are most likely to study and which universities they most commonly attend.

The Most Common Degree Subjects

What should you study if youve got your sights set on making the big bucks? Fittingly, the most common subject matter for higher education was economics and finance, suggesting that when you know money, you know how to make money! Billionaires such as Warren Buffett, Alice Walton, and Elon Musk have degrees in economics. 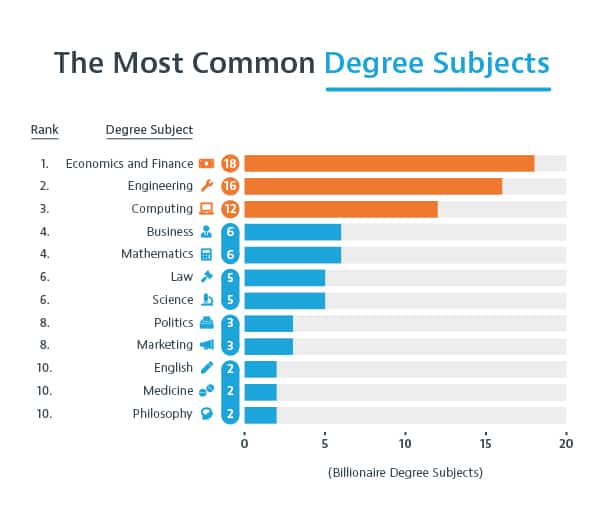 The college degrees studied by billionaires in the United States

The Most Common Degrees

When we look at individual degrees, economics still sits at the top of the table with 16 of the top 100 billionaires having studied the subject. Computer science was studied by nine of these billionaires, with the likes of Jeff Bezos and Sergey Brin holding these degrees. 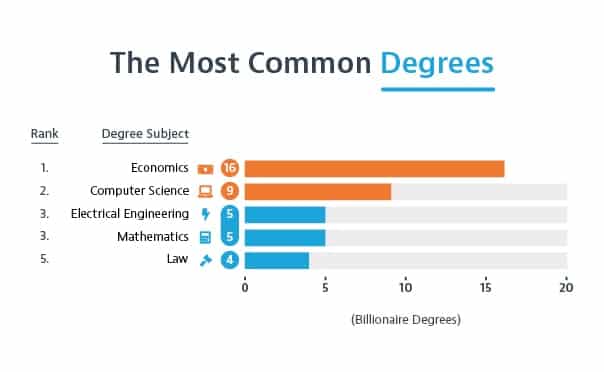 The most common degrees studied by US billionaires

The Most Common Universities

It comes as no surprise that the most common universities for billionaires to attend are those that are some of the worlds most prestigious institutions. Harvard takes the top spot with eight of the top 100 billionaires having attended. However, just because they were once students at these universities, it does not mean that they actually graduated. In fact, both Bill Gates and Mark Zuckerberg are Harvard drop-outs, although it didnt seem to hold them back too much! 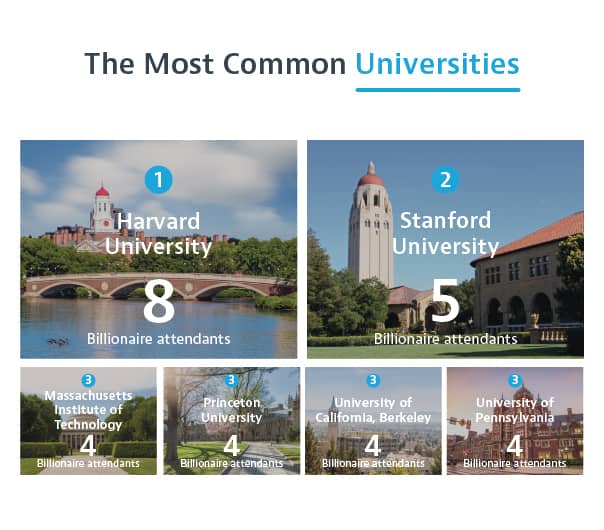 See the list of universities attended by the most US billionaires

We included every degree achieved, including undergraduate and postgraduate studies. To get our subjects list, we grouped some subjects together, such as computer science and computer engineering to show the most accurate numbers.

When looking at universities, we also grouped graduate schools and departments with their parent institutions, so Harvard Business School and Harvard University are counted together.